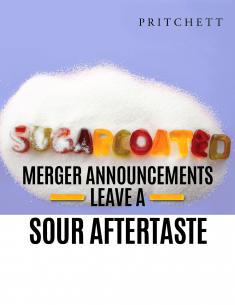 Why are top executives so prone to screw up in announcing mergers to their people?

You see it all the time—a top-ranking officer takes the microphone to announce a deal, smiles confidently, then pushes the cheerleader needle into the red zone with comments restricted to good news, over-promotion, and merger “happy talk.”

Does it sell? NOT USUALLY.

Executives should legitimately put a positive spin on the merger story. Leaders need to be upbeat…they should seek to reassure the work force. But way too often these initial comments are so one-sided that they mainly trigger cynicism and damage management’s credibility.

If you’re announcing a merger, don’t forget that you’re dealing with adults. They prefer truth over dubious promises. They’re irked by an unrealistic positive slant. You’ll be talking into a headwind of skepticism, and a Pollyanna pitch is just going to stoke the fires of employee distrust.

Fight the urge to sugarcoat the story. Tell it like it is. Instead of coming across like some breezy politician, position yourself as a real leader.