Pride and Prejudice: The Politics of Merging Boards of Directors 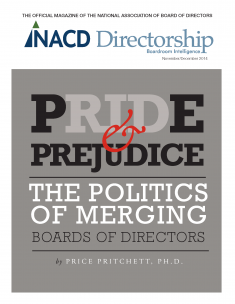 Some 200 years ago, Jane Austen—one of Britain’s best-loved authors—wrote a famous novel about marrying. And money. Deep down that’s actually what mergers are about, too, so I thought to myself, “Maybe her classic, Pride and Prejudice, has parallels for merger integration.”

After all, “corporate marriage” is the most common metaphor used when people talk about combining two companies. And as for the part about money, well, M&A is always based on a financial proposition.

Since Austen’s story about 18th century England focuses on social class, let’s look at merger integration from that angle. In the hierarchy of power and status, the Board of Directors is the uppermost class…the top rung of the corporate social ladder…the highest level of governance. So how do pride and prejudice affect the integration process in boardroom society?

Merging Begins at the Board Level

Actually very little has been written about the wedding of boards when companies marry.  This is peculiar, given the importance of directors and the fact that boards are at the front of the line for integration.  Merging is ordinarily a top-down process.  Directors go first.  They’re the top link in the chain of command, and the makeup of the merger’s new leadership structure needs to be resolved as quickly as possible.  Urgency in blending the two boards into one means this elite crowd will be among the first to feel three highly predictable dynamics triggered by a merger:

1. A sharp increase in ambiguity and uncertainty
2. A drop in the trust level
3. Arousal of instincts for self-preservation

These are natural human responses. When change hits, the first scan is for danger. And as the playwright John Dryden stated, “Self-preservation is Nature’s oldest law.”  We can hope that directors will be selfless and statesmanlike as the board gets reconfigured, but let’s not presume that they are Vulcans. These power brokers fall prey to the very same “me issues” that will bedevil the entire work force as the integration process unfolds. Incumbent board members wonder, “Will I get to keep my directorship? How might my role on the board change? What will happen to my compensation?” And so on. These concerns make perfect sense. Since board personnel are the first batch of people facing consolidation in the merger, some will be the first victims of redundancy.

Integration is a politically sensitive process at all levels of an organization, but especially so in the rarified air of the boardroom.  Pride is more easily bruised at this altitude. After all, directorships are a badge of honor—ego gratifying, high octane fuel for one’s self-esteem.  People who occupy these positions often covet the prestige more than any monetary rewards that come with a board appointment.  Some find that the power carries the most appeal.  Some put more value on the business connections that come with the job. Some prize most the upper crust coolness of being in a network of celebrity names. Of course, there are other perhaps more noble psychic rewards, such as the intellectual challenge, an opportunity to contribute, or a chance to learn and broaden one’s self through board work . . .