Four Common Approaches to M&A Integration That You Should Avoid 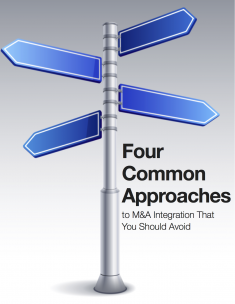 I’ve been thinking. We need a more colorful classification system for how companies go about the merger integration process. You know, a new nomenclature. So I sat down and did some reflection.

Going through my memory bank, I pulled up some of the most common patterns I’ve seen as companies are acquired and merged. Since so many deals go bad due to a mangled integration, I decided to start by categorizing the dysfunctional approaches.

Here, in no particular order, are my top four.

This is a fire-fighting approach to merger integration where management, reacting to the tyranny of the urgent, lurches from crisis to crisis. For lack of planning and discipline, impulse rules. Priorities are constantly changing, resources are poorly allocated, and people lose their bearings. This produces a lot of wasted motion and unnecessary stress. The integration process becomes a high-strung, confusing drill that keeps the organization off balance as management continually responds to the last pressure point.

Bureaucratic organizations embrace a “big government” approach to integration. They’re slow-moving, territorial, and procedure-oriented, putting undue faith in the myriad merger rules they’ve concocted to regulate the situation. Executives justify this approach on the grounds that it’s prudent . . . that it reduces risk. But their preoccupation with process results in in a sluggish integration that actually increases the odds of failure. Execution suffers as managers grind along according to their precious rules and politics, sacrificing all-important speed and flexibility on the altar of the bureaucratic cookbook.

If you don’t recognize the name, well, Cy is the famous abstract artist who created the painting below. You’ll pay dearly for his scribbles, scrawls, and splatters in the world of high-falutin art. If your integration plan looks like something he conceived, you’ll pay dearly in the high-flying world of M&A. Get the idea? Cy Twombly art is random . . . disorganized and haphazard . . . improvised, erratic, and unfathomable in “logic.” Smaller companies, in particular, are famous for merging in an incoherent style that resembles Cy’s technique. And trust me, it gets expensive.

This is the switchback. It’s a pattern that shows up when executives buy a company and announce to the world that it will remain a stand-alone acquisition. But after grappling with reality for some months, they realize that their laissez-faire intentions were ill- conceived: Alas, the companies should be integrated. Why the change of heart? Maybe it was flawed due diligence, or the loss of key talent, or a nasty drop-off in business. Whatever the cause, “the 180°” reversal by the acquirer produces a whiplash effect, a destabilization more traumatic than routine integration would have caused. People cry foul and feel doubly resentful toward top management for reneging on its promises. Truth is, delayed integration means people have to deal with a double whammy. And that threatens the chances for merger success.