Register 2 months before the workshop dates and save $1,000. 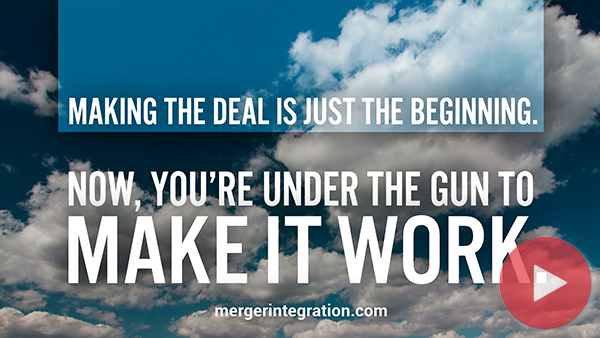 Culture clash is too often a scapegoat when mergers go wrong, says Joe Aberger, the president of Pritchett, a strategy firm that specializes in mergers and corporate culture and is headquartered in Dallas. Factoring it into the preparations for the merger helps avoid scapegoating.

HP grossly overpaid for EDS, said Joe Aberger, president of Pritchett, and author of Selling your Business: Making the Right Moves and Avoiding the Costly Mistakes. For that reason, “the HP-EDS deal was dead on arrival,” he told the E-Commerce Times. Where HP erred was in structuring the deal so that synergy targets were too high to be achievable, Aberger said. “Nor did they incorporate any of what I call 'contra-synergies' or negative possibilities," he pointed out. "It was a case of irrational exuberance -- HP got carried away and got involved with a deal that took on a momentum of its own."

It's important for HR leaders to remember that a CRA should have a limited focus if it's to be effective, particularly when it comes to a merger, says Aberger. "A lot of cultural issues are lightweight and trivial, and only a few carry enough voltage to affect the bottom line," he says. "You've got to prioritize -- change only the vital few traits that impact profit, and learn to live with the small, annoying stuff."

A variety of factors are contributing to the boost, which Dallas- based Pritchett LP President Joe Aberger said is up globally over this time last year by about 25 percent, both in volume and in deal amount. Pritchett LP specializes in integrating companies' operations post-merger.

"There's a lot of cash on the sidelines right now," Aberger said. "The 1,000 largest companies have about $3 trillion in cash."

How to Deal with Change – An Interview with Dr Price Pritchett, CEO of PRITCHETT

Price Pritchett, PhD has spent nearly 30 years as an advisor on merger and integration strategies to senior management in Fortune 500 companies and other organizations and is the author of the best-selling Employee Guide to Mergers and Acquisitions. Dr Pritchett talks about change in the workplace, and how to successfully deal with change.