Be Willing to Be Unfair in M&A 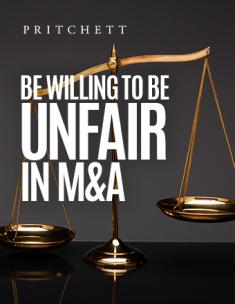 M&A integrations always require you to make sacrifices. It’s a time of tradeoffs. Compromises. Less than perfect solutions. So far as the people issues are concerned, it’s like watching a card game—some win, some lose, some break even.

You can care deeply—for everybody—but you can’t keep from damaging some careers.

Deep inside, managers know this is the case. Obviously, everybody can’t come out on top. But when it comes down to deciding how the two work forces will actually be integrated, the people calling the shots usually feel compelled to make a show of fairness. Instinctively, they want to come across as acting equitably, to be seen as even-handed in the way they assign people to the various positions.

This sort of behavior is fully understandable. But as it turns out, it’s not particularly good management.

In fact, if being “fair” to current employees is a top priority, merging is probably a bad plan. It’s sort of like wrestling with the decision of whether or not to declare war. How can you justify it if you’re unwilling to sacrifice some lives? Nobody ever said that mergers are the kinder and gentler way to corporate growth.

All too often the attempt to be fair and equitable in the integration process produces bad business decisions. You’ll see it at the very outset, where people are being tapped to serve on the various merger task forces and transition teams. Companies will bend over backward to get equal representation from both organizations. Balance is the big word. And it sells, because it suggests that people on both sides of the fence will have equal say-so on merger matters.

But should they? Usually not.

This approach emphasizes fairness at the expense of competence. And it’s a flawed methodology because it implies that in the future, equal treatment is going to be the norm. That’s not the message you should be sending these days. It’s an entitlement message, suggesting that equality counts for more than competence. It implies that which company you come from is more important than your individual ability to contribute.

These mistakes show up most commonly in the so-called “merger of equals.” But they occur any time the people in charge make staffing decisions designed to achieve balance rather than the best.

This is the “one for me, one for you” fallacy. You get a VP of Marketing, we get a VP of Sales. You get to keep the fabrication plant in New York, we get to keep our regional headquarters in Texas. None of these negotiated “tradeoffs” make sense on their own merits, but somehow they come to be seen as reasonable when taken together.

This is lousy leadership. Bad management. It takes “fairness” down to too local a level. Looked at in the broader scheme of things, how fair is it to stockholders? To customers? Even to the rest of the employees? Don’t all those people deserve the best the combined company has to offer? What if this were two professional football teams being merged — would you go for fair representation from each team in your starting lineup, or would you field your very best talent?

Now is the time to go for organizational upgrades. Choose the best, regardless of which company provides it. Don’t shoot for a 50-50 deal. Go for 70-30, or 10-90—whatever makes you stronger, faster, more competitive. Whether you’re talking managers, facilities, product lines, sales teams, R &D projects, even brand names, be willing to be “unfair.” Favor the best, instead of playing the game of politically correct tradeoffs.

GOOD MANAGEMENT GETS SACRIFICED ON THE ALTAR OF COMPROMISE.